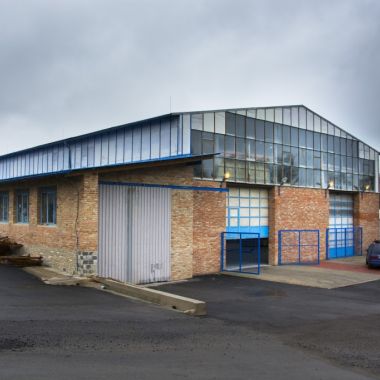 The requirement of the investor was to provide fire protection for the truss structures of the roof of the warehouse and for the columns supporting the construction.

The warehouse, whose floor plan makes up 24 x 48 meters, is 13 meters high, making the application process slightly difficult. The hall is used for storing various materials, except for combustibles. The requirement was to provide a fire resistance of at least 30 minutes, which was stipulated by fire regulations.

The investor initially had three choices. The first was to provide fire protection with gypsum boards (such as Knauf Fireboard). However, this would require an increased amount of work and would be time consuming. Not to mention the finances. The second option, which turned out to be more realistic, was to use intumescent paint. However, the expenses for this solution were still very high, since the construction needed at least 3 to 4 coats of paint to obtain the required thickness of the fire protective layer. After consultation with Knauf technicians, it was decided that fire-resistance plaster Knauf SIBATERM® Outdoor is the best solution in this situation. The passive cement based fire-resistant plaster Knauf SIBATERM® Outdoor can be used in a relatively high humidity, which was the case of the unheated warehouse open during the day (every season). The budget compared to the fire-retarding paint was ultimately halved, which played a crucial role in the investor's decision. The rate of application was also a great contribution, as one layer was sufficient at the required thickness of 15 mm, calculated on the basis of the profile of the steel beams used in the roof structure. As a reminder - the minimum thickness of SIBATERM plaster must be 10 mm and maximum 30 mm when applied in one working sequence (if in two, max 60 mm). The advantage for the investor was also the fact that he could apply SIBATERM plaster himself. Application can be done using PFT Multimix and Swing machines, which can be rented.

The procedure was not complicated. First it was necessary to clean the beams with a steel brush in order to remove remnants of old paint, coarse dust, etc. The surface had to be dry, but this was not a problem due to the nature of the warehouse. Prior to the application of SIBATERM, it was crucial to apply Knauf SIBATERMGRUND primer in a 10 to 20 mm thick layer to ensure that the plaster adheres perfectly to the construction material. Once the primer coat had dried (no earlier than 2 hours and no later than 24 hours), the plaster could be applied using a plaster machine. Due to the height of the ceiling it was necessary to use a 20 meter hose. The plaster was applied in one go. The temperature was slightly above +10 ° C, which fully complied with the advisable conditions (the technical data sheet shows a minimum temperature of +5 ° C). Approximately 10 mm thick spraying dries for 14 days on average, but it depends on the specific building conditions, i.e., mainly temperature, humidity and ventilation. The material consumption is usually 7 kg per m2 at 10 mm thickness.