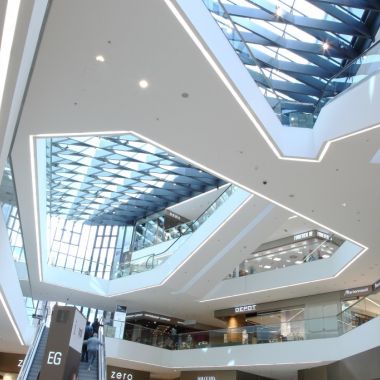 The core task for the shopping mall project in Innsbruck was to create an independent and identity-creating building as a "replacement" for the former buildings of Kaufhaus Tyrol and to design the building's facade.
With the architectural design language of British star architect David Chipperfield and the well-thought-out shop concept of the new Kaufhaus Tyrol, a new shopping mall has been erected in the heart of the capital of the Alpine region of Tyrol. The modern shopping mall accommodates around 50 shops on an area of around 30,000 m². After a construction period of two years, it was opened on March 4th.

Created upon the site of the former Kaufhaus Tyrol in the Maria-Theresa Street, a complex of buildings was erected whose new construction extends to the Erler Street. The old building, the so-called Schindlerhaus, was carefully reconstructed, extended and integrated into the project, taking into account the preservation of the cityscape. The facade structure consists of load-bearing prefabricated concrete elements adorned with natural stone and room-high window openings. Conically shaped columns structure the façade and form the end of the Maria-Theresa Street, as can be seen especially in the crucial slanted view.

The largest building mass was constructed from blocks. “We have broken down the volume into smaller, more true-to-scale proportions in order to integrate it into the structure of the neighbouring buildings. This creates a sculptural play that is visible from the street, the courtyards and the atrium, but also from the mountains," says project manager Birnbaum. The central atrium between the building sections is based on a roofed external space. There are bridges, stairs and balconies, as light connecting elements, between the internal facades of these parts of the building. These were clad with Knauf drywall systems, because no other construction method offers such design possibilities that can be realised at this speed, explains Christian Oberneder from the drywall company Haydn & Oberneder. A maximum of 54 drywallers were employed, who installed steel beam casings with Knauf Fireboard and installed tens of thousands of square metres of 12.5 mm Knauf boards, which were used as ceilings and walls. Thanks to the existing scaffolding, assembly went smoothly. Strikingly simple yet memorable, a light band runs along the edge of the ceiling throughout the interior of the shopping mall. This clean integration and connection of the light body to the ceiling was realised with fittings.­­