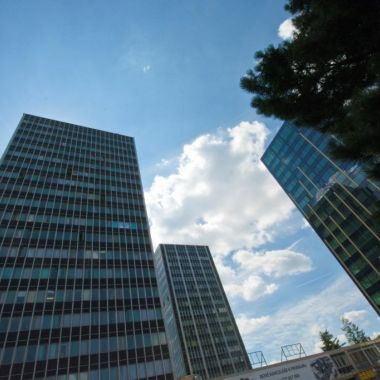 The reconstruction of the highrise Šumavská Tower office building in Brno was an ambitious and demanding project. The building was originally built in the 1970’s and needed to be refurbished. In the process a new steel structure had to be added to the current load-bearing skeleton, which had to be fire protected. It was required that the fire resistance of steel structures would last up to 90 minutes. First, fire protection plasterboards were considered as an option, however, the idea proved infeasible both in terms of expenses and time consumption. Therefore, a new solution was brought to attention – to instead use the fire protection gypsum plaster Knauf Vermiplaster, thus ensuring fire resistance of steel beams and ceilings.

Knauf Vermiplaster is a fire protection plaster that is intended for the fire protection of steel girders and ceilings, composite ceilings made of keystone sheet metal and concrete, as well as reinforced concrete and non-supporting walls, ceilings, columns and beams. The range of fire resistance ranges from 30 to 120 minutes for steel and composite constructions and up to 180 minutes for reinforced concrete structures. The advantage of Knauf Vermiplaster is the fast application, perfect adhesion, the ability to protect shapely complex structures and the long service life - the life expectancy of the plaster is 25 years. Knauf Vermiplaster is applied with the classic plastering machine PFT G4 with the D4-3 rotor.
This technology for fire protection has been chosen due to material and time savings. The only thing to keep in mind while working with Knauf Vermiplaster is the thickness of the plaster, as this affects the declared fire resistance. In total, over 80 tons of Knauf Vermiplaster were applied to ensure the fire protection of the building.
Meanwhile, the fact that the existing ceiling constructions have a load carrying capacity of just 150 kg/m2 has predetermined the use of dry construction as a core technology. Knauf drywall system has been used for various purposes throughout the building, including construction of sanitary facilities, installation of partitions and construction of aesthetic ceilings to name a few.  It is estimated that more than 32 000 m2 of gypsum boards were used during this project.
Undoubtedly, the realization of fire protection of the renovated Šumavská Tower highrise building in Brno is probably the largest order of this type.