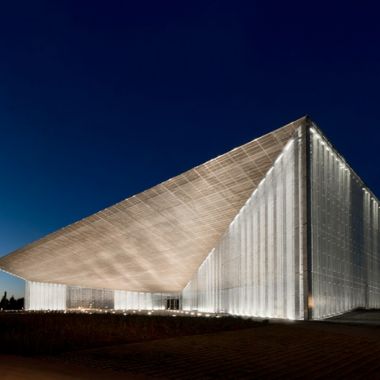 The Estonian National Museum (ENM) is a cultural history museum, with particular emphasis on ethnography, aiming to examine culture as part of everyday life and lifestyle in a diversity of temporal, spatial and social contexts. A decision to construct a new main building of the ENM in Tartu was adopted in 2003. Structural construction was completed in April 2016, followed by interior finishing work. The building was opened to visitors on 1 October 2016. The prestigious Kenneth Hudson Award was given to ENM in 2018.

The main goal of the renewal process of ENM has been bringing the national museum of Estonia to the 21st century. It was envisioned as a unique and state-of-the-art museum, hence modern and compatible construction materials were used, providing a safe and comfortable environment for the visitors and employees. Fire safety is especially relevant in a public building of this magnitude and importance, as it houses not only Estonian national treasures but also hundreds of people.

Knauf products have been extensively used in the construction of the Estonian National Museum in order to comply with all quality and safety standards. Knauf Blue, Knauf Green and Knauf Red plasterboards were used for ensuring fire safety, sound insulation and sound absorption. All of our main solutions were used for the interior works and the creation of necessary light structures, such as:
The construction materials used included:

Welcome to the Knauf FireWin product and system catalog!

Welcome to the Knauf FireWin product and system catalog!